I worked on this today at the hospital. My dad is getting ready for surgery tomorrow.

This was a move slow, do not start anything complicated weekend.  We did have some scrap wood laying around though and I thought that they might make some pumpkins for the farmhouse table.  It took me all of 15 minutes to cut the wood into various lengths.

I looked at them and decided that they needed a little rounding.  I tried cutting the edges with the chop saw, but I really didn’t like it.  I ended up getting out another of Hubby’s tools.  The belt sander.

This thing scares me, but less than sanding each of the blocks by hand would. I did it all by myself!

I sanded the edges of each block then got out some left over paint.

I got Hubby to drill a hole in the top of each block then I found sticks to put in the hole and wood glued them together.  The sticks look something like a stem.  I also had some twine covered wire from the country wedding that I twisted into corkscrew shapes and glued to the block.  I had some left over burlap from the wreath project that became leaves.

I think it turned out great.  Hubby said they looked like blocks with sticks in the top.  Let me know what you think.

I used dark glaze on some.  I left in on a while so that it would soak in and look rustic.

I painted this one coral then the cinnamon glaze color then sanded  lightly to let the coral show through.

I love that you can see the hill in the background of this shot.
I think they look great on the farmhouse table. 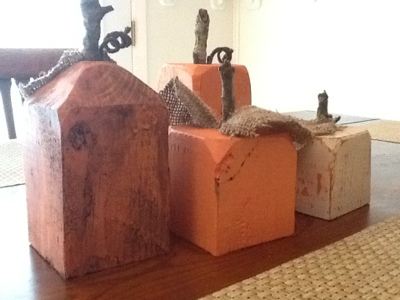